Once the Bolsheviks were firmly in control and Stalin had established himself as the man in charge there came a great many changes to Russia during the 1920’s and 1930’s. One major problem Stalin had was the peasants. The majority of the peasants were not communist and often very distrustful of them and other outsiders. Another problem was the grain crisis of 1927. After overseeing the aggressive procurement of grain from the peasants earlier Stalin decided to collectivize them onto state farms.

The Peasants did not approve of this plan. As Freeze states; “But collectivization and the resistance it provoked cost vastly more lives than the October Revolution or even the ensuing civil war.” (Freeze 348) The peasants did not want their right to own private land abolished and to be forced to move and leave all of their possessions. 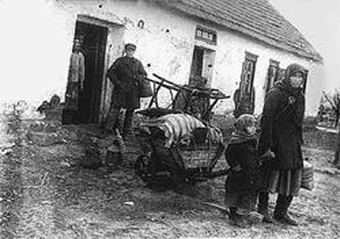 This image shows Kulaks being deported.

One way Stalin tried to make this process happen was by turning other peasants against the Kulaks. These were the “wealthy” peasants and were staunch resistors of collectivization. Once Stalin had decided to annihilate the Kulaks as a class they could face one of three fates. They could be deported to other districts, be arrested and send to camps or prisons in remote areas, or be pushed to lands that were inferior outside the Kolkhov. (Freeze 349)

“Let us destroy the Kulaks as a class”

One collectivization had been accomplished the conditions were horrible. In a letter to Ordzhonikidze who was a close friend of Stalin, Feigin states; ” I was in various kolkhozes–not productive and relatively unproductive ones, but everywhere there was only one sight– that of a huge shortage of seed, famine, and extreme emancipation of livestock”. (Feigin letter) Many of the peasants perished form these conditions.

https://www.loc.gov/exhibits/archives/coll.html This line will take you to the Library of Congress with other translated documents about the conditions of the Kolkhozes (collective farms).

While this collectivization was able to help the Bolsheviks maintain power, and to ease some of the burdens of famine, we must not forget what the peasants went through. They were torn from their homes, forced to leave all their belongings, and transported to new areas. Most did not want to go, and were forces. Many resisted and died. So in the end, was it worth it? That question may forever remain unanswered.